Other essays on the history of BoW in Egypt, early Iran, late Iran, Japan, China, Turkey, Spain, The Netherlands, Italy and England.

I've been working on a series of cups this last few months as part of the further development of my Blue on White (BoW) research. Originally the items were made to support my assertion that much of the later period BoW earthenware items were crafted as a response to the popularity, and limited supply of, BoW porcelain from China (also known as Yuan or Mingware). While I still believe this is true in many cases, making sweeping generalizations across Europe isn't a good practice. Also, the statement blatantly ignores the greater socio-political climate impacting each center of production over the 500 odd years I'm reviewing.

Given I've now collected over 300 images of blue and white ceramics (earthenware and porcelain) and mapped a majority of them, I can start to correlate designs and trends over space and time. Where possible I've mapped the items to the place of creation however if the description is vague, such as 'Iran', I've mapped it to the current capitol city (Tehran). In places where only a cultural label is available, such as Ilkinid, I've mapped it to the capitol city of that dynasty (Samarqand).

Some things to note before I get started:
If I could, I'd put picture after picture here to illustrate my statements but then this essay would get out of hand. Instead I've inserted limited, specific examples and linked to other items of interest.

My research is obviously biased by the sources of the extant ceramics I've found. Many of my items come from the Met and V&A (and London Museum to a lesser extent). This is because they have high resolution images and a good search function for a sizeable chunk of their collection. The annotations are also written in English, my primary language. Others are from Christies or other auction sites. I am aware provenience may not be solid for auction items but this is often a good resource for less than museum quality goods. I am also well aware that my collection of images is biased both by my personal selection criteria (cobalt blue glaze on white) and by the bias inherent in the collections I have chosen my samples from. Like me, each museum must focus their interest and their collections reflect their curators interests so they may have limited items from specific regions. The quality of the databases used to store the online collections has also affected my personal collection, ease of access and breadth / specificity of search terms having the greatest noted impact on my ability to access items from specific regions or cultures.

The Chinese were the first to work out how to make high temperature firing porcelain and cobalt blue was one of the only glazes available to them that was stable at these temperatures. The high temperatures and unique composition of their pots created items that were lighter and stronger than their earthenware counterparts. It was due to this that they were in such high demand (porcelain wasn't achieved in the west until the Renaissance). High demand + scarcity of supply worked to give the Mingware the lure of being rare and thus valuable. Eventually the Chinese started creating items specifically for export utilising more European designs. Meanwhile, local potters across Europe imitated the Chinese designs, blending the shapes and patterns with the local styles. Some more detail is available on my previous (and very broad) look at blue and white ceramics.

Three origins have been proposed for much of the cobalt used in glazes over the period of examination, Egyptian evaporites, Iranian (Kashan) resources or sources in the Chinese province of Jingdezhen. Scholars have determined that the Kashan resource supplied much of the worlds cobalt in the early middle ages with some sources in Turkey and later in Germany being exploited as well.  It is interesting to note that originally the BoW of China utilised Kashan cobalt rather than the closer mineralisation, possibly because they hadn't been discovered or refining the ore was too challenging at the time.

As a result, level amount of BoW earthenware production before the 14th century is a feature of proximity to the mineral source / trade routes and exposure to the technique of tin-glazing. Later the demand for and availability of Chinese products plays a greater role in determining decorative motifs and the shape of BoW earthenware pieces. These designs are often distinctly different from other local styles. In the following discussion I will address what I consider to be major production hubs and the styles of BoW and non BoW earthenware before and after the introduction of Chinese porcelain.

Outside of China, the earliest extant colbalt blue on white ceramic item I've been able to location originated from Iraq, so I shall start my analysis there.

All of the extant examples of BoW I have found in Iraq are bowls or shards that were created in the 9th or 10th century. At this time Iraq was part of the Abbasid Caliphate, the capital of which was Baghdad. Though the Caliphate fluctuated in size and military/political influence, they remained the dominate power until the 13th century when the Mongols had the last Caliph killed in 1258 AD.

The blue-on-white ware I identified are the typical dark blue (cobalt) on a tin-glaze underglaze. Though most are simply identified the origin as 'Iraq', some specifically mention Basra (1, 2, 3, 4, 5, 6, 7). The BoW earthenware from this time appears to come in three styles calligraphic (1, 8, 9), geometrical (2, 3, 7) or floral shapes (4, 5, 6, 10, 11, 12, 13). Given the similarities in bowl shape and design elements I am inclined to assume all the others were produced by potters in, or originating from, Basra. Bowl 14 though found in Nishapur, Iran, is identified by the Met Museum as originating in Iraq. Stylistically, it is very similar to bowl 13 so I have mapped it as Al Basra, Iraq as well.

Given that BoW ware produced in Basra was probably imitating Chinese whiteware imports it is clear there are three stylistic camps developing in the 9th and 10th centuries. The BoW ware has simple floral, geometric or calligraphic designs over a white tin-glazed background. The Victoria and Albert Museum suggests that Iraqi potters were the first to develop the white tin-glazed background as well as lustreware such as this bowl (15). The lustreware produced in Basra at this time featured complicated patterned floral and animal motifs. In addition to the lustreware and blue-on-white, the potters utilised a wide pallet of colours, including yellows, browns and greens as seen on dishes (16) and jugs (17).
Similar items are produced in China at this time called Sancai-ware (18). There does seem to be a stylistic overlap between the Iranian green/yellow/blue items and the BoW design motifs as can be seen in this dish (19).

After the 10th century, a significant power shift occurred within the Abbasid Caliphate (i.e. rise of the Mumluks). The area the Caliphate of Baghdad directly controlled was contracting as sections pulled away and established their own ruling lines.It's possible the power base shifted to Egypt and the Basra potters followed, establishing tin-glazed earthenware and lustreware in Cairo. For more information of the rise, technological developments and fall of the Basra pottery, there is a wonderful series of lecture notes hosted by the Ashmoelon here (the most relevant section reviews Jessica Hallett's thesis here). 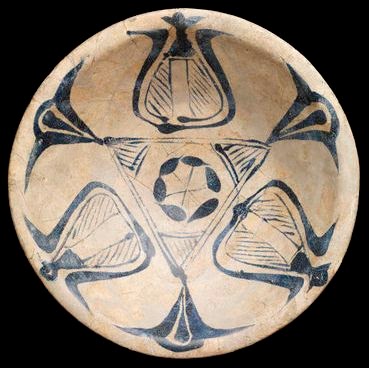 A link to a post containing all of the reference images and no hot links.


A section on the Abbasiddian potters from a web based teaching course on islamic ceramics hosted by the Ashmolean Museum. http://islamicceramics.ashmolean.org/Abbasid/pottery.htm

A short article on Basra's Potters and their developments
Attwood, R. 2005 Basra's Inventive Potters. Archeology Reviews. Vol 58, 2.
Posted by Unknown at 02:47 No comments: