I should have posted this a while ago, please note, this page is updated as I find more gems. My collection of Blue on White ceramic images mapped to location of creation. Note: only 80 items initially load, you need to scroll to the end of the collection before they'll all show up on the map. Zoom into your area of interest to see clusters around centers of production.


(Japan and The Netherlands) A good 28 page article on the porcelain trade by the VOC from 1600 - 1660's. Discusses the introduction of Chinese porcelain via captured Portaguse ships in 1602 and 1604
Keel, C. 2007. Early 17th century Chinese Trade Ceramics for the Dutch Market: Distribution, Types and Consumption in Proceedings of the International Symposium: Chinese export ceramics in the 16th and 17th centuries


(Iraq, Iran and Egypt) A section on the Abbasiddian potters from a web based teaching course on islamic ceramics hosted by the Ashmolean Museum. http://islamicceramics.ashmolean.org/Abbasid/pottery.htm 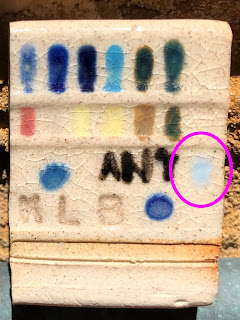 My buff test tile with Pale Jade circled. It's a reasonably boring colour though it might be good for replicating the celadon glazes of China.

I had another 12th century Iranian shaped cup so I decided that since I love sultanabad-ware so much I should try another experiment to see if I can replicate it with a clear turquoise / blue glaze. This cup has been underglazed in black oxide and what is called "Pale Jade". The Pale Jade under the clear glaze looks more like a very light blue. I'm hoping a transparent green coat will bring it to a more appropriate colour. I'm also hoping the difference between the buff colour and the pale jade will be sufficient to replicate the tonal differences seen in the Sultanabadware. 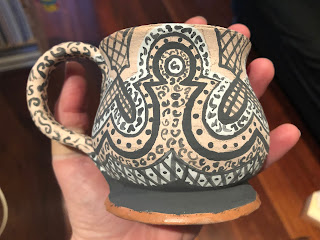 When decorating this cup I didn't want to copy a extant piece exactly because I'd already done that with my Lochac 12th night A&S entry (Part 1 of this Buff green set). Instead I used general references from my Sultanabad Pinterest collection. 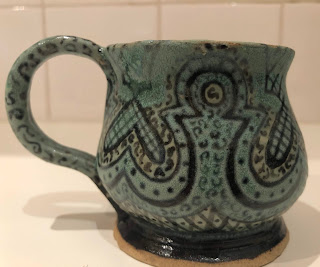 Oh wow! I love this piece. The buff area has come out even more green than the jade area. When I was dipping the cup in the two green over glazes I noticed the overglaze didn’t really coat the underglaze. This may be because the bisque pores were full of glaze and couldn’t absorb mire water reducing the ‘stick’. 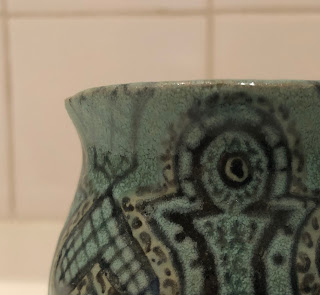 I can’t decide if the opaque green glaze was too thick here or if there simply hasn’t been sufficient heat. Either way, there are some cloudy areas which needs more investigation. It all seems to be around the rim...

My entry for the Kingdom of Lochac 12th night Arts and Sciences competition in the category of "A container" is a cup based on an extant example from 12th century Iran (Persia). This cup has been hand thrown and hand glazed by myself over the last two months. It is currently unfinished, sitting at stage 6 of 7. This accompanying documentation will discuss the extant item, the creation of the object and my development in the following sections:

This project has taught me a lot about ceramics cups, having grown from previously only throwing one moderately successful cup under complete guidance prior to November 2019 to being able to independently form and shape the objects quite close to what I am after. I am rather pleased with the results and plan on exploring period shapes and glazes more going forward. I believe I have achieved the targeted outcome of this project and there is very little I’d change for future implementation. 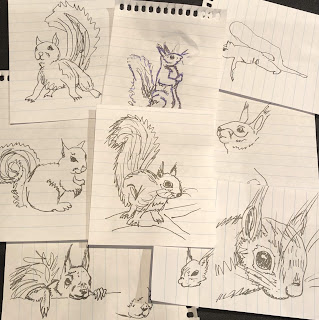 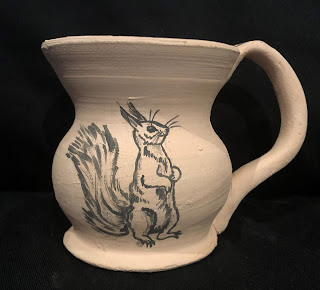 Squirrel mug, pre-firing. Shading with watered down oxide seems to have worked well.

While is is a basic experiment, I'm quite charmed by my design choices. For the plain buff, I've chosen a curious long eared squirrel. I have a friend who loves squirrels and I would like to gift her this mug after this experiment. I did sort of want to do the lazy one peeking over a branch but the shape really didn't fit on the mug well. 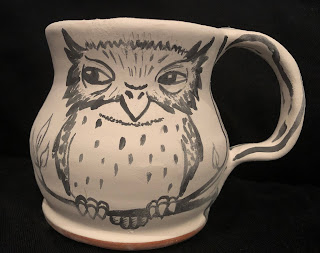 Judgy Owl mug, minor shading. hoping a single layer is sufficient to retain the detail with the basal white layer.


The second candidate for this experiment is the Judgy owl. This was painted over the white basal layer. The basal layer is very powdery and I'm a little concerned some of it was included into the underglaze while it was painted on. Many areas of this design only have one layer of black. I hope that'll be sufficient to come through the white and retain the design. 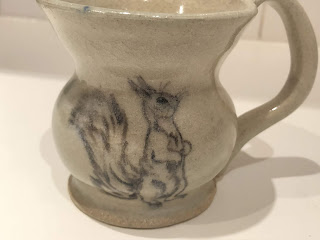 The buff with a clear over glaze. The detail came out well but it looks like there may have been contamination in the glaze as patches of the clear have a greenish tint. All in all, a successful cup though the shape is a trifle over exaggerated. 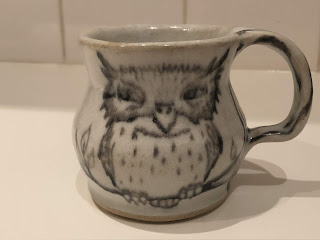 This is the best owl. I think the single cost of black was too light and the satin white background too mobile to survive the clear dip well. The other owl looks a little faded. Next time I’ll try wetting the white glaze with a light water misting before applying the black.