I made a plate for my friend Phillipa. She's pretty awesome and loves her chickens so when I found the following image I couldn't help but modify it. I believe the original is supposed to be peacocks, but their little bug eyes and beaks made me think of chickens. So they became chickens.

The LACMA have two bowls in this style. The other one (M.73.5.266) has a lot more intricate detail but a similar peacock shape. The buffware with this figerative style is specific to Nishapur, Iran. The Meteropolitian Museum of Art conducted a number of digs in the city in the early 20th century and recovered numerous artifacts (1). The style is closely linked to sgraffito but lacks the incised decorations (2). A good example of sgraffito ware can be found here for those curious as to it's styling.


I've been doing a number of yellow and green items recently. I quite like the colour combination, but I'm also aware there a much more experienced artist who produces sgraffito in my Kingdom, Alex the Potter. Since I don't make my own bisque yet, I'll be steering clear of sgraffito and limiting my emulation of buff ware.

I'm really happy with how this turned out. The green/yellow/white/black contrast looks great and is appealing to modern tastes as well. I only hope Phillipa likes it as much as I do.

3) The extant plate - http://islamic-arts.org/2011/ceramic-vessel-collection-at-lacma/
Posted by Unknown at 02:28 No comments: 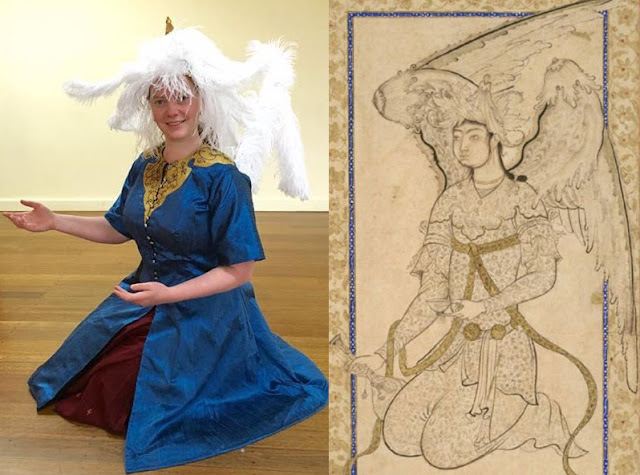 Testing the outfit the night before - who wore it better?

I'm really happy with how my Pelican outfit turned out. It's by far, the best thing in my closet at the moment. I'll wear it at other peoples special occasions. HUGE thanks to everyone who took photos for me, the Peers who spoke of the virtues. My crazy friends who helped me sew the hems, and make the hats and wings and were generally supportive of my ideas. Massive thanks to THL Elizabet Hunter who painted some lovely silk banners of key virtues I believe any peer should uphold and Sharon of Elizabet's Handspun who handspun the black silk thread I used to embroider the golden cloud collar. I love you all! 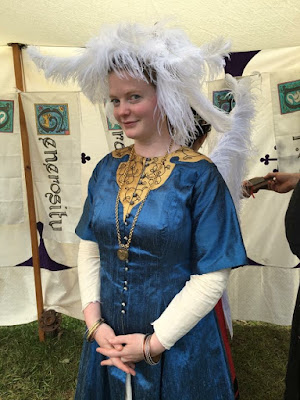 Pelican Outfil #6 - The hat and wings 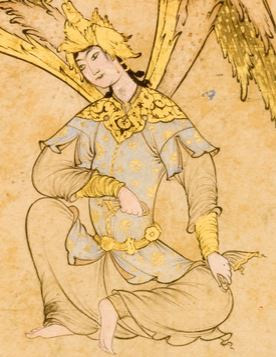 The hat (and wings) on a Peri. The hat often has the same texture as the wings.

The hat has been viewed in passing but was the best part of the whole outfit (in my opinion). The hat came about when discussing my vision with Iglasia. She and Ciara encouraged me aim high and ignore my doubts about allegorical hats. While I was in my home town, frantically embroidering, Iglasia and her husband Edmund whipped up a base for the hat and wings because they're amazing and creative. 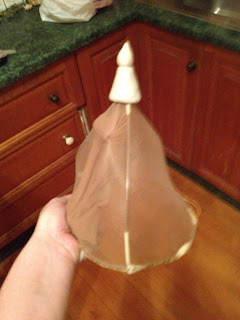 Not being hatters we went with a theatre style base - coat hangers with a stocking stretched over it.

Once I reached Brisbane, we created a knob out of polymer clay which we baked in the oven and painted gold.  I had originally considered making leaves of silk with lightweight wire to support the flare. After long discussions with a variety of people, I decided to use ostrich feathers instead. So we went on a mad dash through Brisbane to buy some large white ostrich feathers before the event. Norm from the Feather Duster Superstore was amazing and provided us with some lovely quality feathers! (Check them out here - their website has had a makeover since last year and is MUCH easier to find what you might need). We got enough to make the hat AND a set of wings. 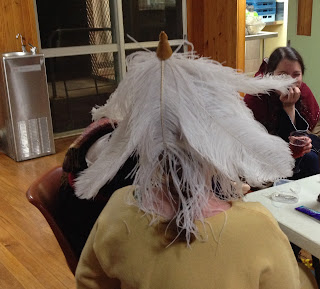 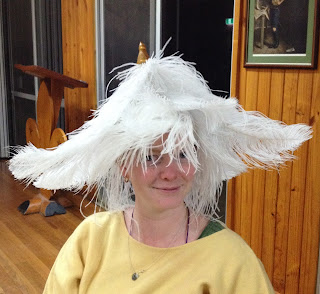 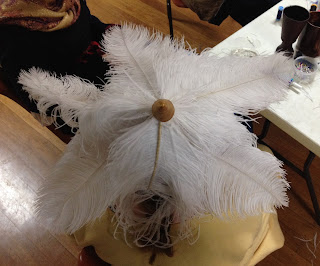 Late that night, the night before the ceremony, Ciara sewed the feathers to the hat by whip stitching their stems to the frame. Helen and Iglasia helped me with embroidery and finishing the hems on the dress while everyone helped make the wings happen. I'm so appreciative of my friends staying up late to help me when I had underestimate the amount of time this project would take - and then added the Hat and Wings on top!

If I had of given myself more time, I might have decorated the feather stems with gold sequins or something. Still, I love how it turned out and can't wait for a chance to wear it again.
Posted by Unknown at 03:12 No comments:

I got so heavily involved in making the outfit, I never actually completed the outfit diary. The 1st anniversary of my Pelicaning is fast approaching, so here it is:

I made another test piece with a dark blue brocade (with modern roses). I designed a collar of silver silk with red and blue silk embroidery. The intent of this was to test our my patterning skills, my embroidery skills and to create a backup outfit just in case I didn't get the final one done in time. In the end, the Lovely Iglasia wore the backup and we looked fantastic!

The embroidery was a simple design based on some of the pottery I'd been working on. I started by tracing my collar pattern onto the silk using a washable marker pen. I included a seam allowance and then free-handed the design. Once I was happy with the design, I simply tensioned it using a cane hoop and split stitched my way around each of the symbols and created 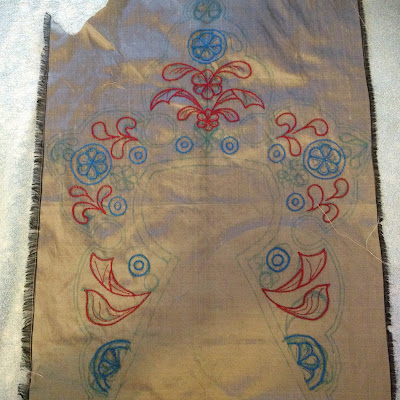 Once the embroidery was complete. I cut out the pattern with my sharpest scissors and sealed the edges very carefully with Fray Blocker. This made the edges a little crispy but it was worth the effort to ensure that the applique doesn't fray and lift of the dress. 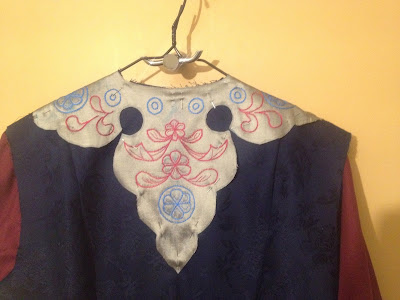 I'm aware that many of the extant images show the collar crossing the shoulder tip however I'm not very good with attaching sleeves so wanted to leave my options open. As a result, the collar just kisses the sleeve seam. I pinned it down and then sewed in the lining. The meant the collar and front opening would be as tidy as possible. I then folded the rest of the seam allowance under, and invisi-stitched the whole thing down. 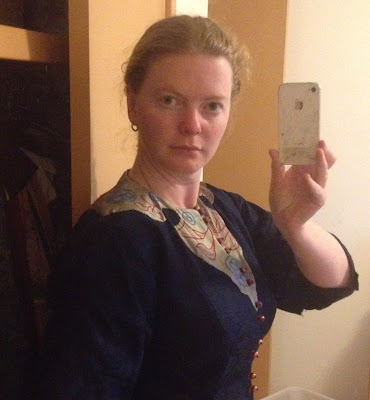 Buttons for the dress were created by wrapping silver coloured ripple beads in the same colour silk thread. A small bead was used as an anchor and I created a pin with my trusty long nose pliers. 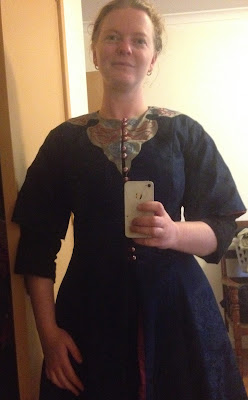 Here I am in the finished dress feeling quite smug about what my limited sewing skills can produce. I quite like how fitted this dress is to my bust without being restrictive. These photos also made me decide to wear a lighter coloured under-tunic on the day as the black sleeves don't contrast well.

The key challenges with this collar revolved around finding a way to stop the silk from fraying. Fray Blocker works but needs to be applied with a brush or toothpick otherwise too much and it'll leech into the silk and darken / stiffen it. Silk that's been saturated in Fraw-blocker won't be easy to puncture with a sewing needle so it's importing to ensure it doesn't take up all of your seam allowance.

SCA reference names for the indian sub-continent.
In the format of NAME, Occupation, sex, date, caste (where possible)

Out of order and not quite secondary (i.e mentioned in introductory sections)