On the 20th of September, I took a casual class in pot throwing at Claymake. This was my third ever time using a wheel, and my first exposure to an electric wheel. Thanks to the expert tuition of Master Simon at Pennsic, I understood the basics of what I was trying to achieve even if I couldn’t quite get my hands to do it properly. In that three hour class, i made many objects, scrapping most of the asymmetrical ones. I retained 5 olive bowls which were bisque fired.

I then signed up for their monthly guided glazing class so I could glaze my treasures. 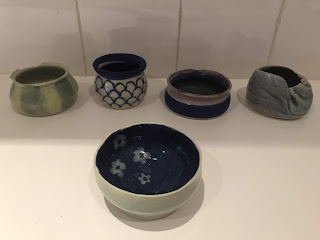 I am rather proud of my creations even through one of the rims snapped. I tried a different glaze technique on each one. From left to right: green and yellow englobe with a translucent green dip; Matt blue interior with blue englobe rim /painted on for the scales in a transparent outer glaze; blue englobe belt with blue interior and aubergene exterior glaze; translucent green glaze throughout with aubergene angle dip and finally englobe interior scratched back to create design with transparent clear over.

Notes: the englobe is a coloured clay tweaked to ensure no shrinking occurs during firing. The glazes and englobe are very powdery when dry and make further decorative work challenging. I’d probably add more gum or something to reduce the powder effect if I were to make my own for the painting or scratching applications.

Notes II: it’s likely the underglaze I used for all previous work won’t stand up to the firing temps at Claymake. Well, the blue might because that’s generally a sturdy colour. The others might not. It’s worth an experiment though.
Posted by Unknown at 19:58 No comments: 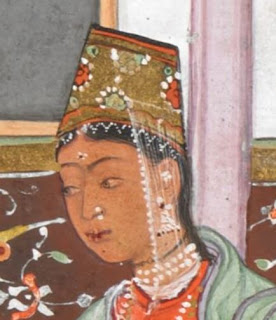 Late 15th Century. Shapur with the daughter of Mihrak, by Qāsim.  British Library MS 5600 - f.399v: Look at the detail on her hat! I love the beaded (pearl?) trim on the edge and the suggestion of gems all over.