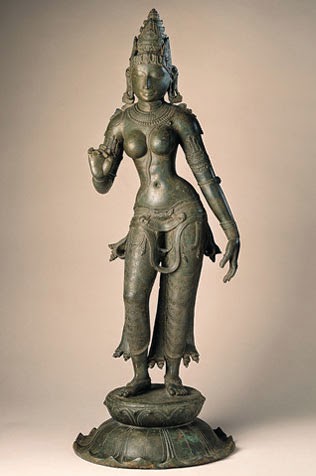 Not amazing resolution, But I Love what the edge of the sari, it looks like dagging, or bling or maybe weights?  Standing Pavati, India, Tamil Nadu, Chola period, 11th century, copper alloy. Accession/museum number 1979.021, Asia Society 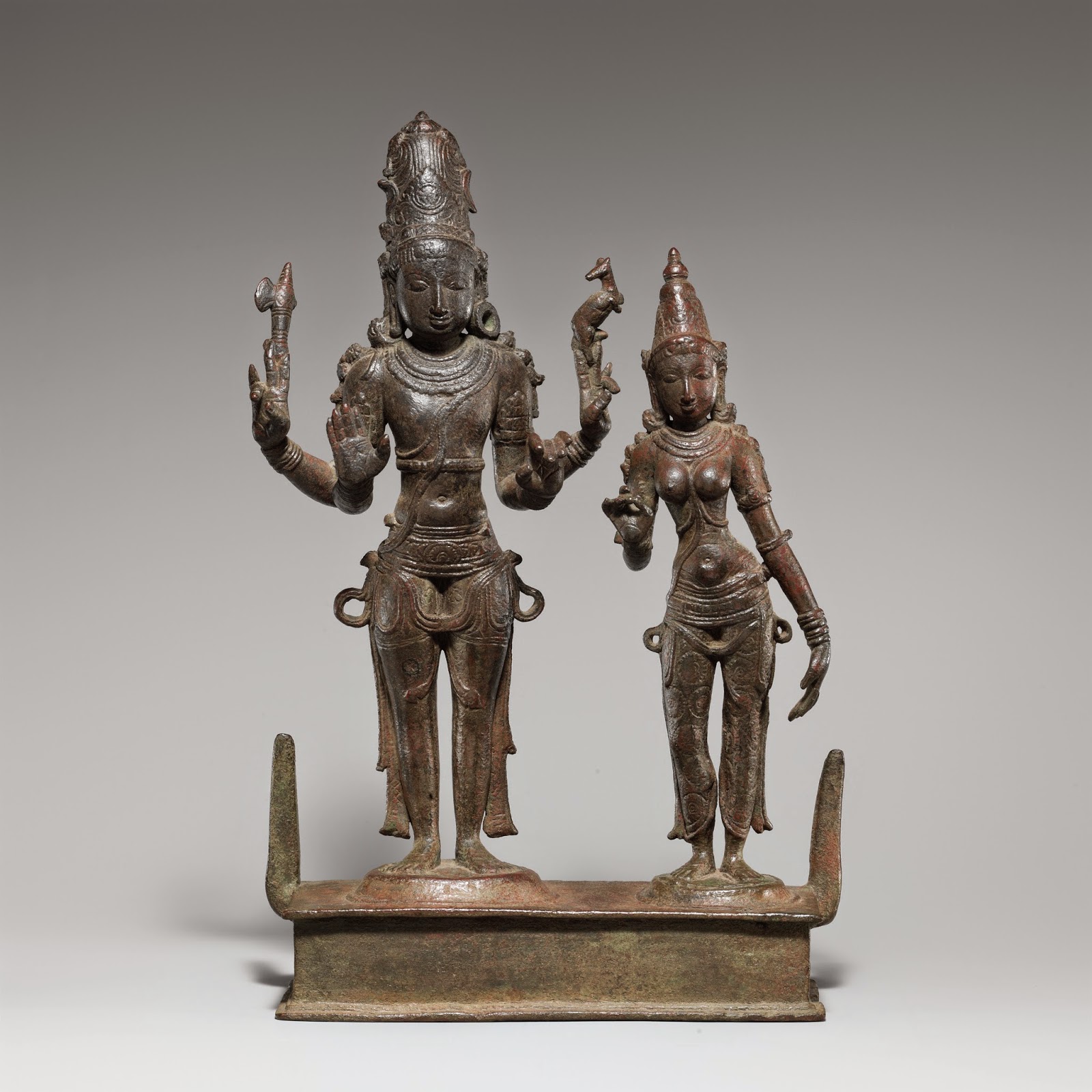 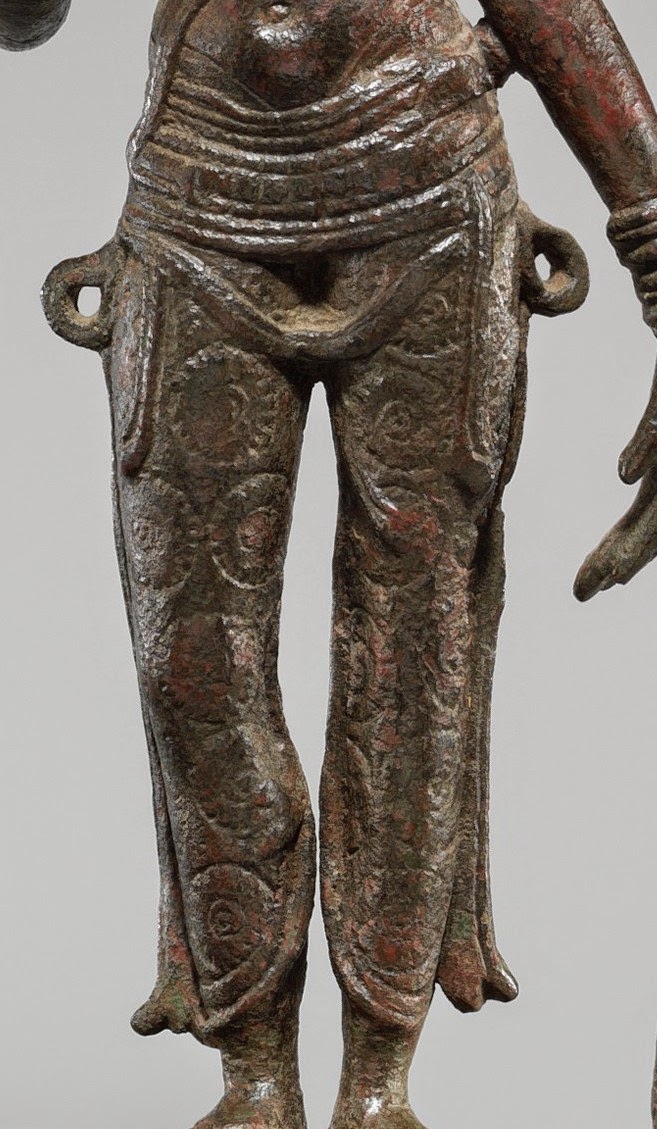 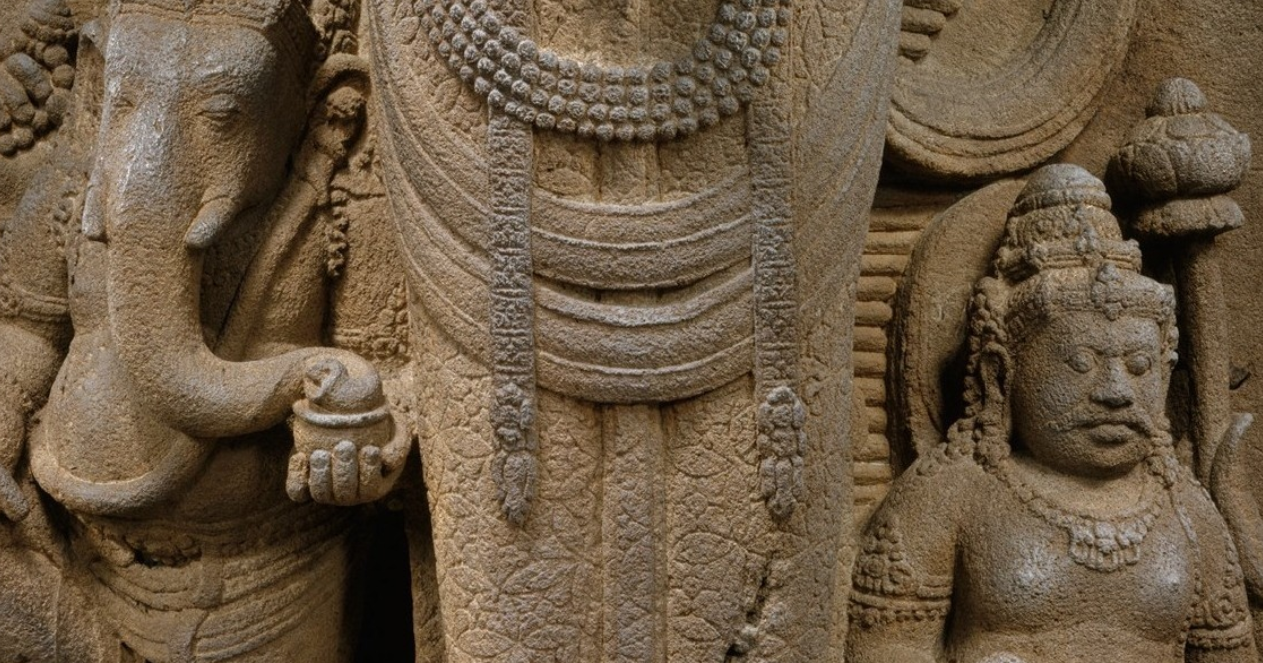 Not Indian but Indonesian (java). A posthumous portrait of a Queen as Parvati (detail). Eastern Javaneese, 14th century, Andesite, Accession number 2001.407. Met Museum. Her lower garment seems to be 100% decorated in interlocking geometric shapes/overlapping circles. This is possible blockprinted fabric such as that I've posted previously. 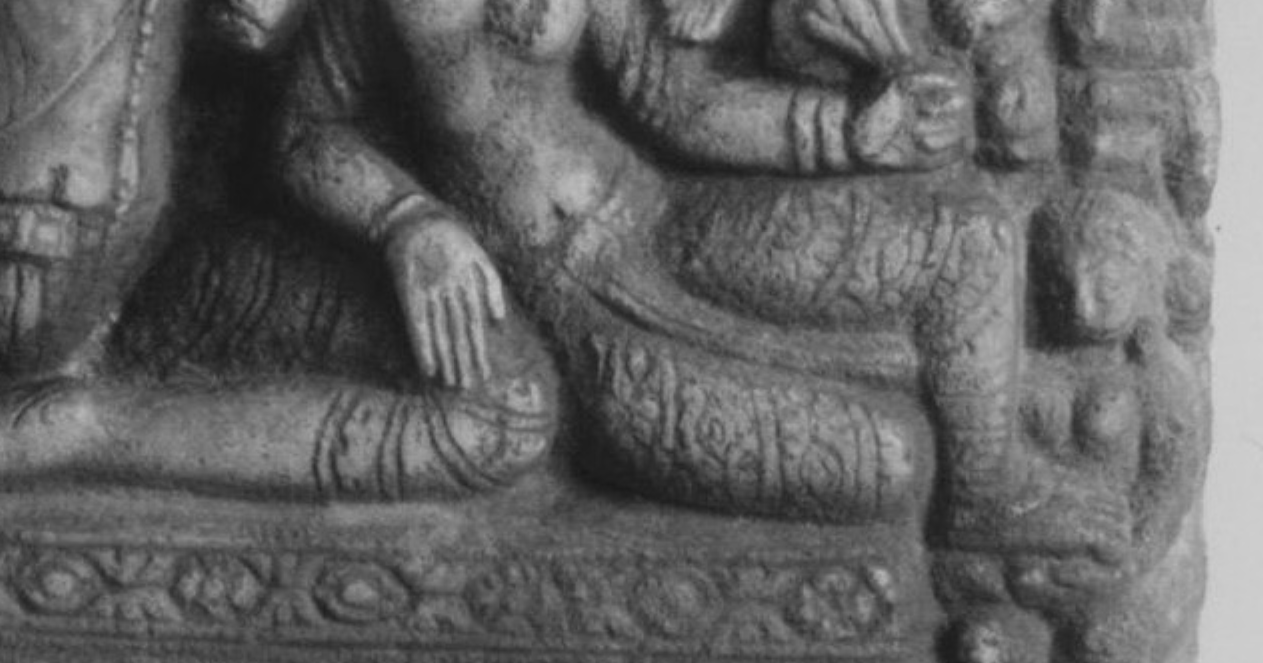 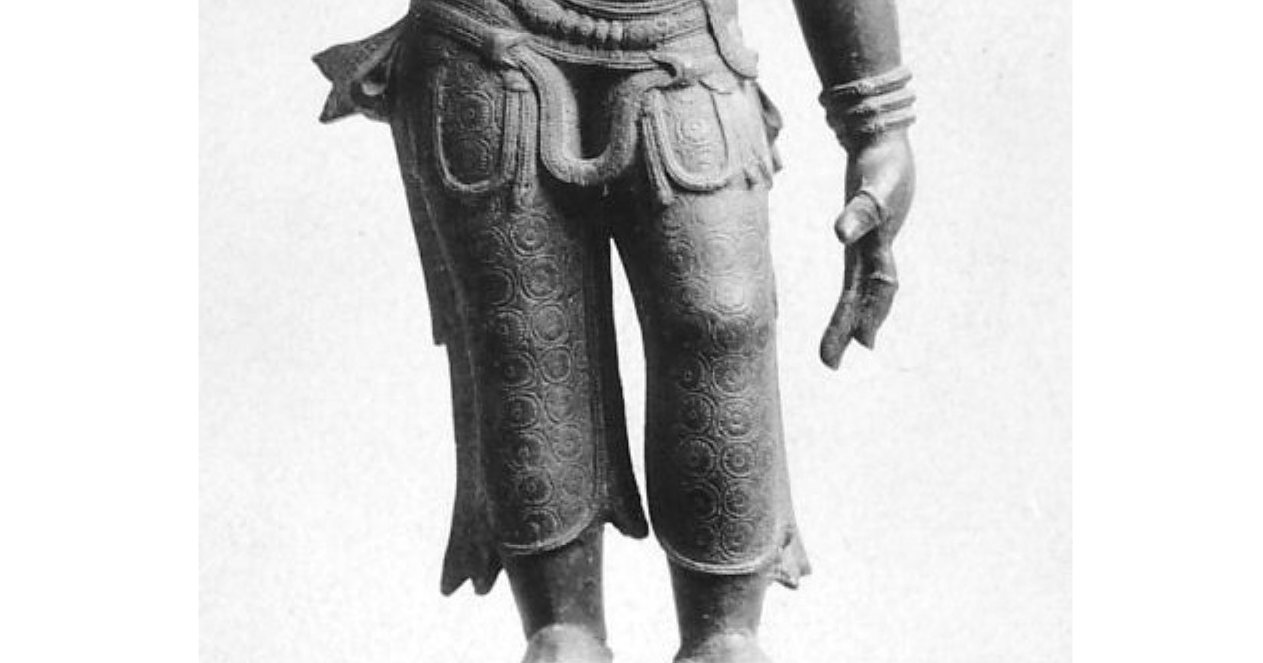 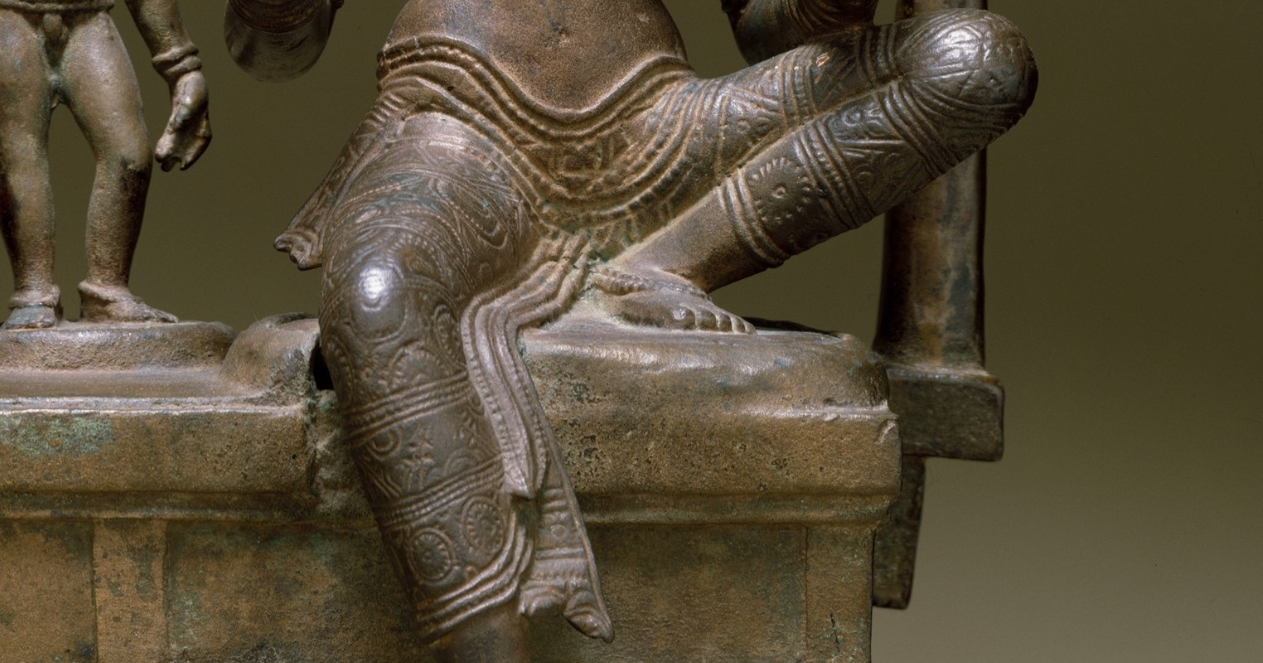 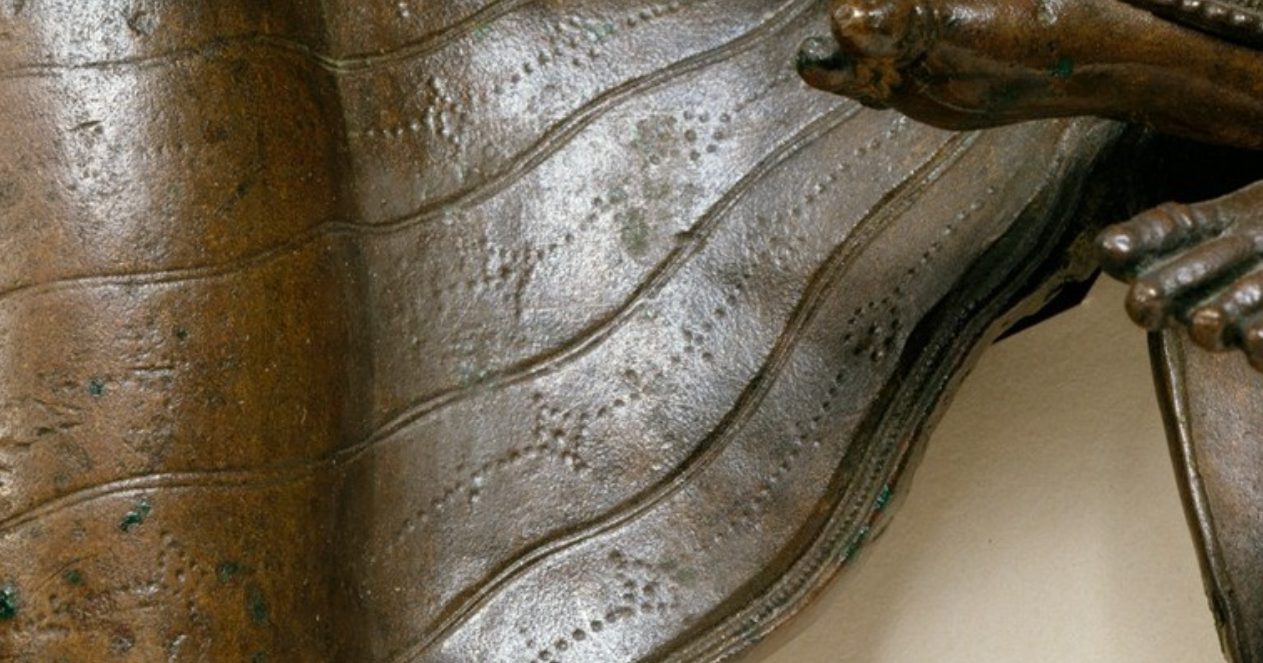 Detail of Yashoda with the Infant Krishna. India, Tamil Nadu. early 12th century. Accession number 1982.220.8, Met Museum. Simple by comparison to previous images, this garment features a repeating pattern of dots forming a diamond and a circle linked with a chain of dots - lovely! 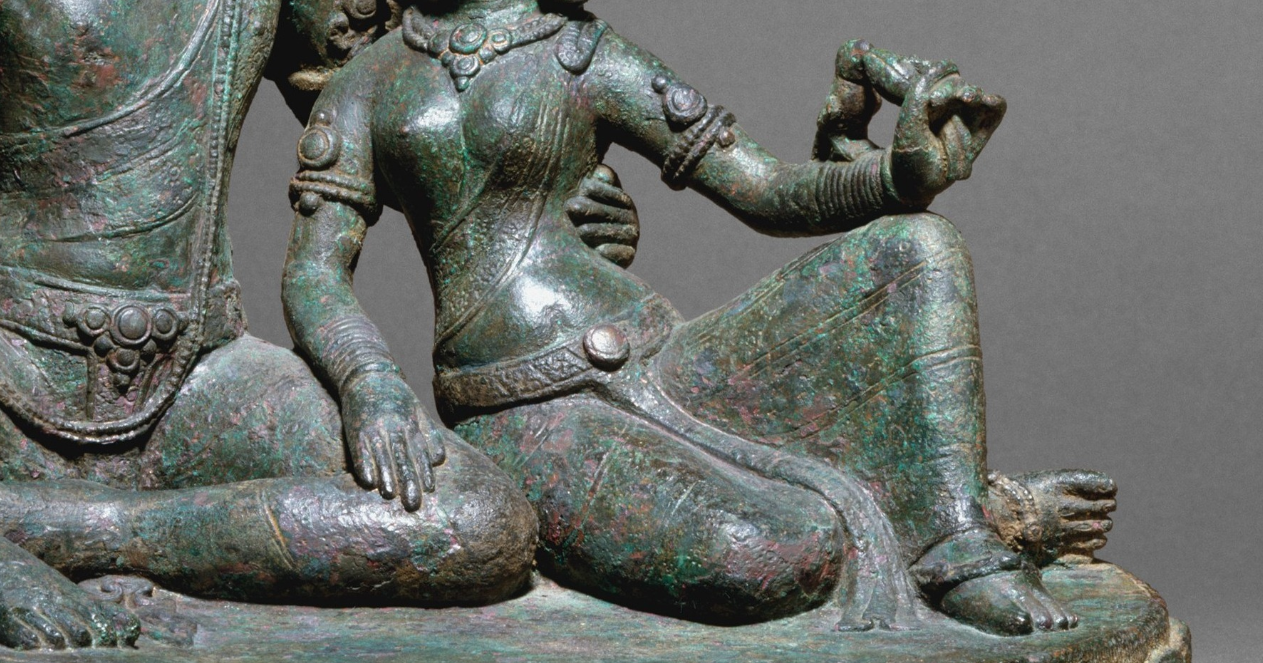 Detail of Shiva seated with Uma (Umamaheshvara), Thakuri dynasty, 11th century, Nepal, Copper Alloy. Accession number 1987.218.1. Met Museum. The garment here is badly corroded so I cannot make out much detail from the picture. Her drape appears to go over her shoulder and the lower garment seems to be decorated with small circles ringed by dots.


That's it for now because it's late and I have to work tomorrow.
Posted by Unknown at 05:10 No comments:

I hit a minor wall with my celtic scroll the other day. I decided to start with the device and then work out the colour distribution from there. I started by doing a test run of all the colours I currently have so I start with a good idea of what tones match the colours of the original Book of Kells. Then I hit a snag - green. The two greens I had were a light green and a dark green. I needed a brighter mid-green colour. and I don't want to mix my own, because I know inevitably I'll run out right before finishing and won't be able to match the colour. I've talked to a number of other illuminators and most of them remarked on the problems of getting a good green (mostly because they seem to need two coats).

In my travels back and forth this week I decided to acquire myself a range of greens rather than mixing them myself. If I find one I'm happy with this has the benefit of being consistent and I won't run the risk of running out of pigment as I work on this scroll. 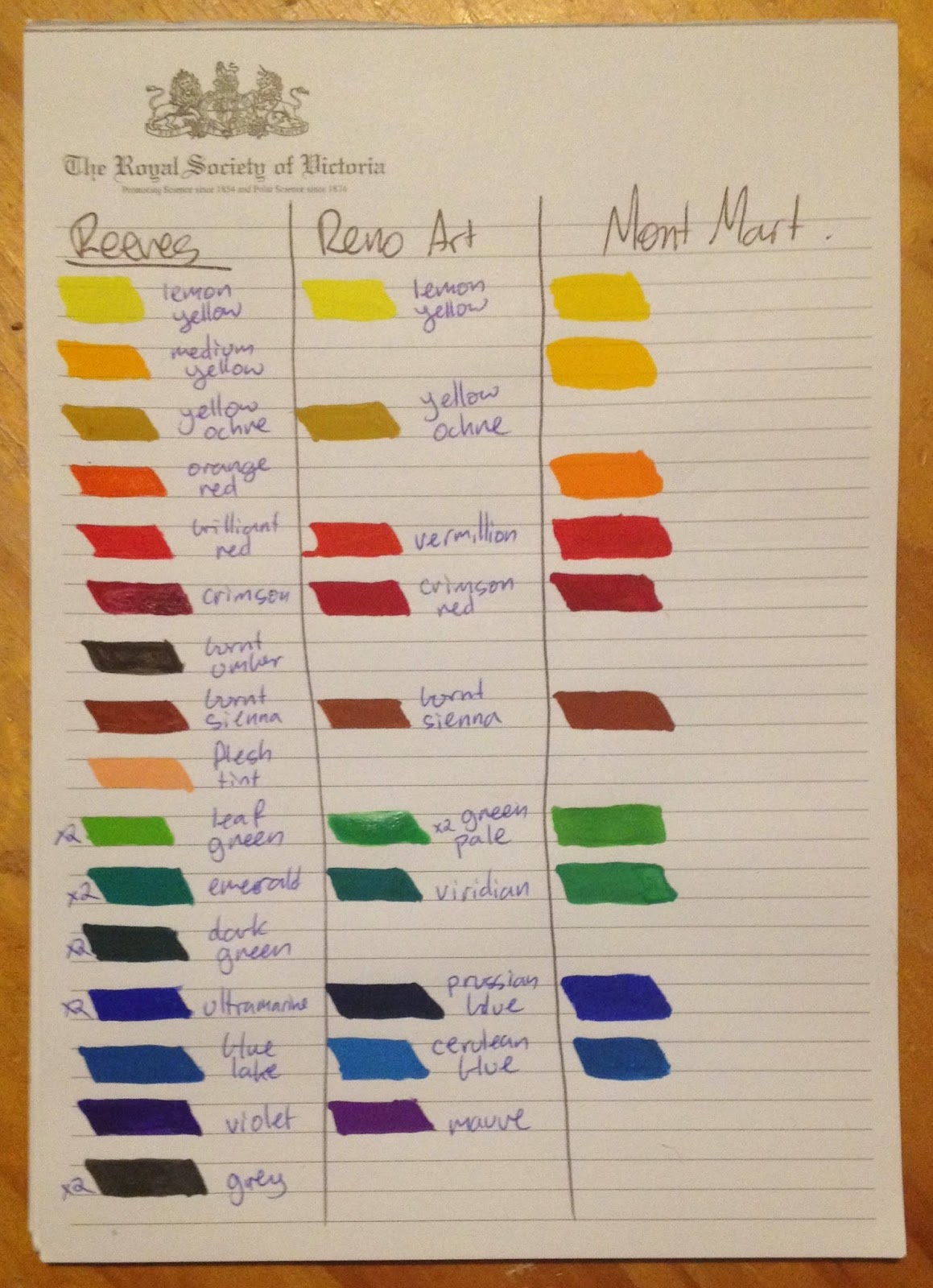 These are all of the colours so far (dried) with their brands and colour name written next to them. I was hoping reno art - pale green would work well but like Reeves crimson it's sort of shiny so not suitable for my needs.
Posted by Unknown at 05:10 No comments:

I'm now a member of the College of Scribes and I have been assigned an AoA to do. This AoA is for a lass who I'm not familiar with. Apparently she likes celtic things so I'm completing one of the Book of Kells blanks for her. The benefit of this is it's all block colours, so reasonably straight forward once I decide on a colour theme.

To start with I've researched the scroll - here's an example of a completed version on the Lochac scribes database. I've googled up all sorts of Book of Kells images (I've misplaced my Book of Kells book in the move) and have found some of the original reference material.

and a close up: So the question is: retain the colours of the originals and be all over the shop, or bend to more modern ideals and sort of colour co-ordinate with the device (green and white)?

Email ThisBlogThis!Share to TwitterShare to FacebookShare to Pinterest
Labels: Book of Kells, Illumination

I did a trail run of my ceramic hands-on A&S class at St Monicas during the AGM three weeks ago. I ran this for three reasons, 1. Beth was about to give birth and wanted to make a pair to the octopus cup before the baby came and 2. I plan on running this at Krae Glas and Stormhold and needed to know how to format it. 3. We were having the AGM and it's good to provide quiet crafty activities while the paperwork gets sorted.

6 people ended up painting ceramic objects which I didn't anticipate. 3 cups (Beths is still to be fired) and three tiles (because I had them sitting around). Louisa's skills blew me away (the bamboo) and I especially like the cups by Janet and Vivien. Vee was also interested but couldn't settle on a design, so she's doing research until I run the Krae Glas session.

Things for next time:

The items I bought while in Sicily 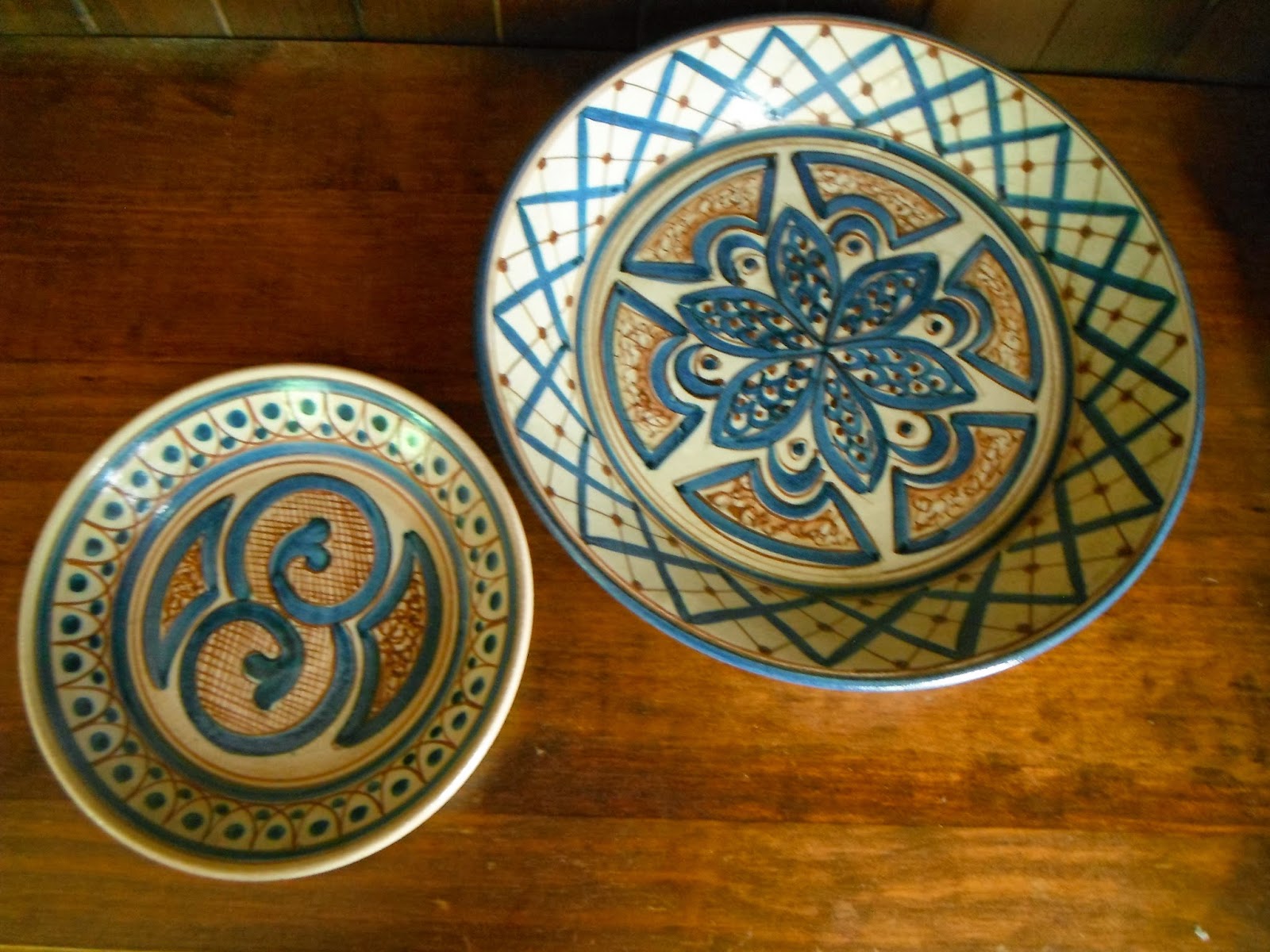 The artist is replicating a style of tin-glazed earthenware from Manesis, in Spain such as this example below. I am quite taken with the style and wish I had the funds, and baggage limit to acquire more. 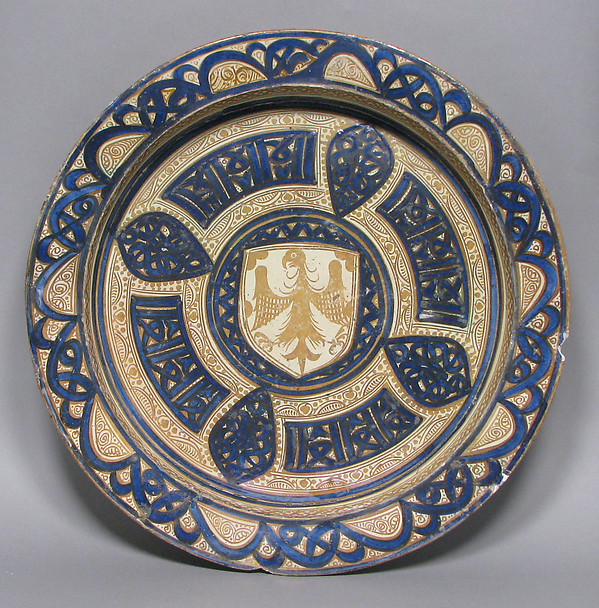 Email ThisBlogThis!Share to TwitterShare to FacebookShare to Pinterest
Labels: Plate

Another commission from the Crown. Her Majesty requested gifts for the incoming Baron and Baroness of Aneala. Rather than make them items with their personal device (which I'll make for their step down), I thought I'd make them some Baronial regalia. More specifically, plates. I haven't glazed a plate in a while, concentrating more on cups and tiles so I thought it'd be interesting.

I started by documenting a design. This was quite a challenge as I wanted an extant item that displayed heraldry but I couldn't do anything too complex as I had only a month. As it was I picked up the final piece and posted it to Kilic the Thursday before the step up/down. Australia post sucks though, so it didn't arrive in time. Also, thanks to Kilic who bravely agreed to do the random stranger on the phone a favour and accept the package at his house. 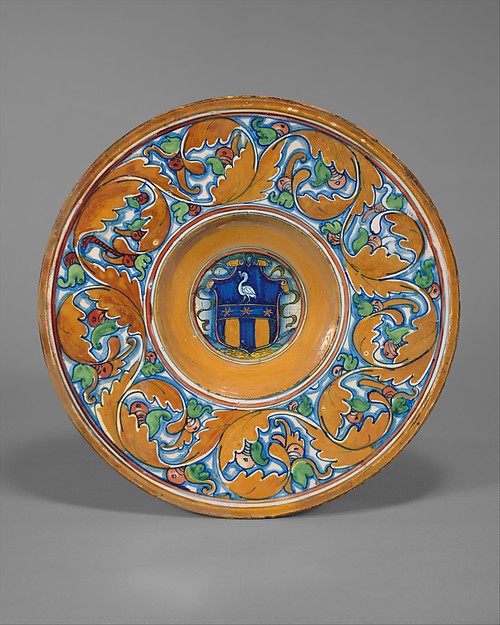 I used many of the elements of this plate. I did away with the berries and smaller green tendrils. Originally I was going to paint the side of the plate blue, the background green and the acanthus yellow but I realised that there wasn't sufficient contrast between the yellow and the green so it all became blue. On the back I made concentric circles of yellow (centre), blue/turquoise, and green. I tried to replicate the white highlights by scratching white lines in but the yellow isn't orange enough to make the contrast sufficient in this image. I'm not 100% happy with these plates (will I ever be?) but on the upside, Aneala now has baronial plates that are microwave and dishwasher safe. One Barony down, many to go. 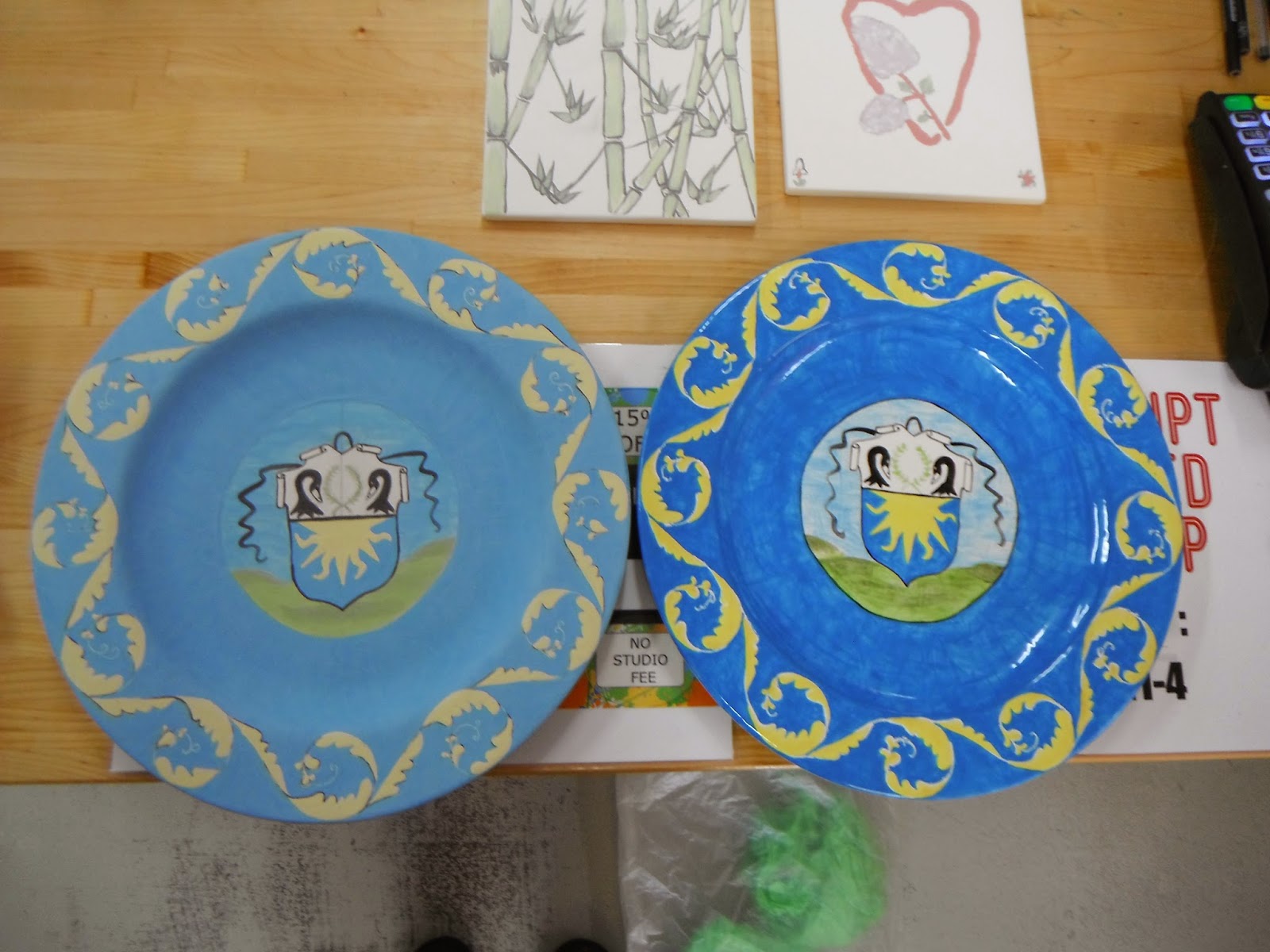