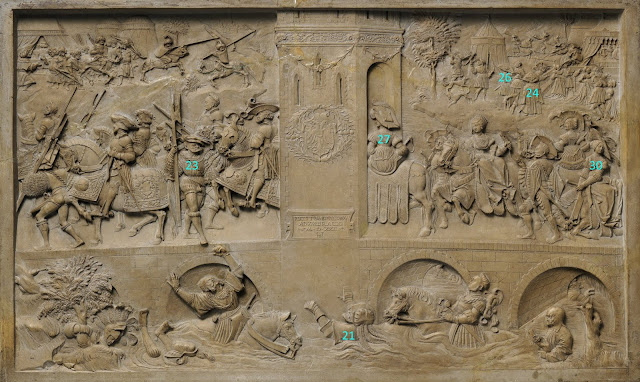 
In the previous two posts I reviewed the hats of The Virtues with regards to the varied brim construction (split brim and floppy hats). There is significantly less material to work with on this topic as displaying the full crown of a wide brimmed hat often means obscuring the face of the wearer. Working within the limited confines of the The Virtues, I've attempted to propose some constructions methods to achieve the look on display. These are aimed to direct future experiments with cloth to determine how construction and use requirements (function) might dictate form.

The rest of the post is below the cut as it's picture heavy, again. 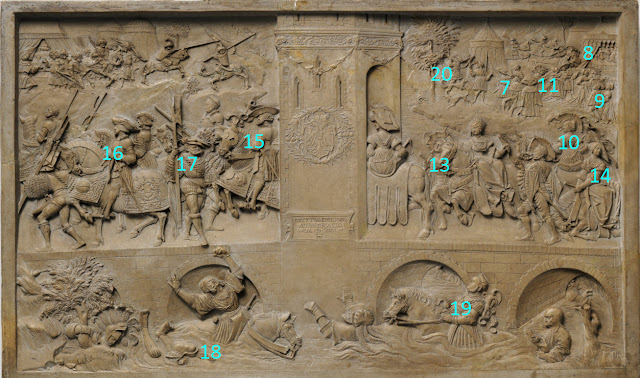 The Allegory of Virtues and Vices at the Court of Charles V features a lovely spectrum of hats from the early 16th century. Tallerbarret and Split Brim hats were discussed in the previous post so this post will look at floppy hats, upright brim and combination hats. I consider floppy, or "Star fish hats" to be distinct from split brim as cuts do not overlap and more slashed than cut and pieced. For this analysis "Split brim star fish hats" will be a combination of both where the splits clearly extend to the crown and overlap in places and are additionally slashed. There are a variety of floppy hat patterns to be found here (beware the poor livejounal formatting) and a good tutorial by Geoneva von Lubeck can be found here.

Further analysis is under the jump cut. 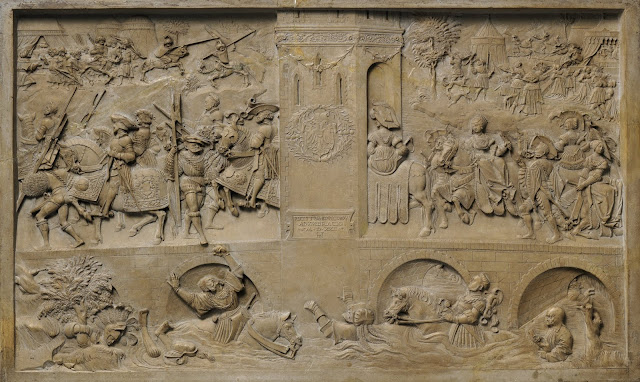 When delving into a new area it's important to have a few prime images to fixate on otherwise you'll get lost down the rabbit hole. Often people use an image of something they've seen someone else wear and they try to find references to reference it, make it fit a costume or make it more period. In this case, I started by collecting a Pinterest board of Landsknecht, Cranach and general German-ish hats. This gave me a good reference base for the variety of hat types available within my scope. I then narrowed the field by focusing on one item and using it as the basis for my research. If you want to do the same, there's a large collection of hat references collated by Jeanne de Pompadore here. It'd be nice if they're hyperlinked to a primary source but they typically contain sufficient information in the caption to help you find the original without needing to use Google image search.

Personally I found my focus image deep in a Pinterest linked-linked-link. The sculpture by Hans Daucher contains a good number of hat types. As it's a crowd scene, it also has a few back of hats so we can see the crown detail. I've numbered the hats to assist as I discuss the various types and my construction conclusions.

So, since I've been making hats recently, I decided Tyr needed one to complete his outfit. As many before me have discovered, accessories like hats take a costume from 'I rolled out of bed' to 'I am Dressed'

Let it never be said that Tyr doesn't like hats (don't believe me? I've got so much photographic proof).

This hat was made in a similar way to the St florian square hat however I used white silk for the lining and didn't cut any shapes out of the wool. He doesn't have a device that'd translate well into cutouts and I was hesitant to ruin a perfectly good hat. We did add a button to the middle because it seemed the right thing to do. Proportionally the button should be bigger (or the hat smaller) but it is what it is.

The hat has had two formats so far. Originally the hat was edged with a galvanized steel embroidery loop size extra extra large. The sort you can buy at Spotlight. This turned out to be a mistake as the edge was too heavy and while it didn't deform while worn, it did try to edge down the wearers head. At festival someone showed Tyr how to tuck under and sew down the edges of the square to make it more of a puff to stop the runaway brim. Very similar to how the St Florian 1 hat ended up. It seemed to work but it still wasn't ideal. 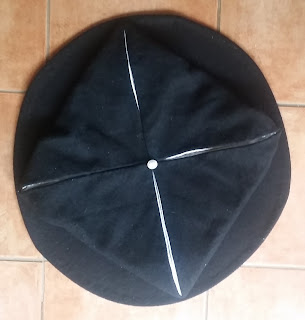 After festival I cut out the embroidery loop and threaded the edge of a witches hat through instead. I had to trim the witches hat wire slightly and crimp it together with some metal tubing. It has significantly reduced the weight of hat however the brim will now pringle if jammed onto a head oddly. Given pringling or maybe drooping appears in some of the documentation, I'm not too worried about that. I've also unpicked the puffing and tacked the corners of the square to the edges of the hat. I think it's a little plain but it looks lovely with the feathers on it. Maybe someday it'll get some slashing, who knows?

Turns out, it's almost impossible to take a selfie of the crown of a hat if its brim has a diameter of 50cm. Though, if you stuff a bike helmet in it, and place it on the floor, the dimensions are about right. 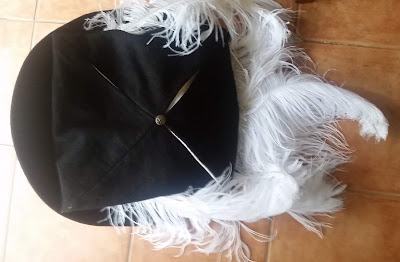 The start of my year was very much caught up in preparations for Rowany Festival. If you are familiar with my projects, you'll know I've been the RF cartographer for 6 (?) years. Ever since I created the job really. It involves a lot of fiddling around with maps and doing my best to please over 800 stakeholders. This year, I was also making garb for Tyr. He needed enough garb for a 6 day event and he's not the sort to schlep around in a basic t-tunic. Oh no. Unfortunately, the only items he had were a couple of shirts I'd acquired at Pennsic and a vest he brought along.

As the shirts were late-period-ish, we had to settle on a wardrobe collection that'd please his sense of flair and wouldn't be too challenging for my sewing skills. We eventually settled on Landsknect, partly because I've been collecting images for hat making, and partly because it has so many options.

I'm not going to go into everything we made, but by the end he had 4 pairs of pants, multiple shirts and a vest. As I've never made fitted pants before, it was quite a learning curve. Tyr also helped out by fray-stopping all the slashed edges. He also sewed some codpieces.

Tyr accidentally in the background... photo by Rachel Vess

I suspect Tyr is really proud of this codpiece. He designed and made it himself. As one of two token American's he didn't really need to advertise but it garnered no end of appreciative smiles. Unfortunately, it was washed in warm water and the red ran so the codpiece is no more.

Late last year I made some hats for the upcoming B&B of St Florian. The hats needed to be appropriate to their German garb and tie into the St Florian device which is a purple buttony cross on a white background.


For these hats I used a heavy black wool which was a little too stiff for a coat. Their expect-ellencies supplied me with some purple and white satin material which they were going to use on other aspects of the garb as well. I used halloween witches hats to provide rigidity to the brim.

This project suffers from the same problem my cranach hat did, where black wool is very hard to photograph well so instructions but no step by step photos are below the cut.

I thought I'd share my process for the geometric dinosaurs I've been playing with this last year. It's quite straightforward if you follow some basic rules:


More ideas below the cut

My new heraldic device is azure (blue), mistral contourney over an  mountain agent (white). I've been playing with the motifs because it's about time I made myself a ceramic cup. My finished ceramics are piling up and waiting for a trip to Victoria to be fired. I really need to complete my bisque stockpile and find a way of indulging in my hobby without the need to fly to Victoria! I took a few liberties with the design and I really hope this improves with firing.

I've been neck deep in block printing experiments this last 9 months so please tolerate the upcoming flood of enthusiastic posts.

Spotlight has now started stocking speedball ink and a variety of supplies and ArtRiot had a buy $40, get $40 sale so I now have a goodly stockpile of various things to experiment with. First up is the Speedball Screen Printing Ink. This is sold in a four pack of black, red, blue and yellow at Spotlight for reasonable prices. I also bought white because I like the idea of white block printing then overdying with indigo sometime in the near future. 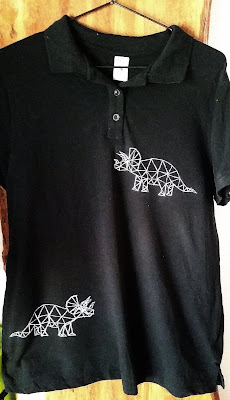 To test the ink I hand painted another geometric dinosaur. The paint is designed to be pushed through a screen print frame. As a result, it's quite sticky and will need thinning before being used in block printing.

If at first you don't succeed, tri, tri again. 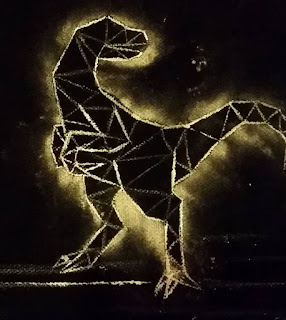 An experiment with hand painting geometric dinosaurs. I'm not 100% happy with the feet but the idea is sound and I'd like to apply it to a variety of other dino's.

The pale yellow halo is actually talc powder which I've used to transfer the outline of my design onto a black polo shirt. The method works really well but has the possibility of gumming up the paintbrush if too much powder is free to move. It brushes off easily once the paint is ironed though.

I haven't posted in a long while due to a combination of crazy work hours, limited internet and a phone (camera) that's on the fritz. One major change in the last month is I've been housebound recovering from major organ surgery. As a result, I've had plenty of time to tackle my unfortunate collection UnFinished Objects. I've managed to clear at least one Australia Post tub of items. I'm pretty proud of this spring clean.